Many hundreds meet in solidarity with Palestine in Lisbon and Porto

In what were possibly the most attended demonstrations of solidarity with Palestine, held in Lisbon and Porto, hundreds of people responded this Monday to the call of CGTP-IN — General Confederation of the Portuguese Workers, CPPC — Portuguese Council for Peace and Cooperation, and MPPM — Portuguese Movement for the Rights of Palestinian People and for Peace in the Middle East, to affirm out loud that the resistance of the Palestinian people will triumph over Israeli barbarism, to the despair of its accomplices.

In Lisbon, Martim Moniz Square was completely filled with a very heterogeneous attendance, including many young people and strong representations of communities from Arab and Islamic countries.

This was followed by the intervention of Gustavo Carneiro, member of the CPPC National Board.

On behalf of MPPM, its vice-president Carlos Almeida linked current events with the history of a century of colonial occupation of Palestine and harshly criticized the Portuguese government for its inaction towards the crimes of Israel. He ended with an appeal to strengthen the international solidarity with the Palestinian people.

The act was concluded by the secretary general of CGTP-IN, Isabel Camarinha.

In Porto, the concentration took place in Palestine Square and was also attended by a large number of people.

José António Gomes, member of the National Board, spoke on behalf of the MPPM.

The other speakers were Ilda Figueiredo, president of the CPPC, Tiago Oliveira, coordinator of the Union of Trade Unions of Porto, and Constança, a student of Fine Arts.

Write down:
I am an Arab.
My identity card number is 50,000.
My children: eight
And the ninth is coming after the summer.
Are you angry?

Write down:
I am an Arab.
I work with my toiling comrades in a quarry.
My children are eight,
And out of the rocks
I draw their bread,
Clothing and writing paper.
I do not beg for charity at your door
Nor do I grovel
At your doorstep tiles.
Does that anger you?

Write down:
I am an Arab,
A name without a title,
Patient in a country where everything
Lives on flared-up anger.
My roots…
Took firm hold before the birth of time,
Before the beginning of the ages,
Before the cypress and olives,
Before the growth of pastures.
My father…of the people of the plow,
Not of noble masters.
My grandfather, a peasant
Of no prominent lineage,
Taught me pride of self before reading of books.
My house is a watchman’s hut
Of sticks and reed.
Does my status satisfy you?
I am a name without a title

Write down:
I am an Arab.
Hair coal-black,
Eyes brown,
My distinguishing feature:
On my head a koufiyah topped by the igal,
And my palms, rough as stone,
Scratch anyone who touches them.
My address:
An unarmed village—forgotten—
Whose streets are nameless,
And all its men are in the field and quarry.
Are you angry?

Write down:
I am an Arab
Robbed of my ancestors’ vineyards
And of the land cultivated
By me and all my children.
Nothing is left for us and my grandchildren
Except these rocks…
Will your government take them too, as reported?
Therefore,
Write at the top of page one:
I do not hate people,
I do not assault anyone,
But…if I get hungry,
I eat the flesh of my usurper.
Beware…beware…of my hunger,
And of my anger. 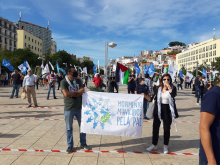 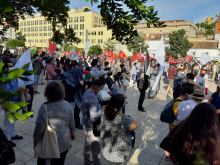 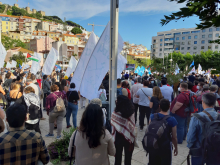 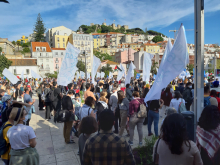