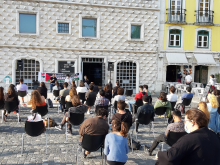 The Platform for Peace and Disarmament, of which MPPM is a member, promoted yesterday May 31, in Lisbon, a debate under the theme «This Banner of Hope: A Look at the Palestinian Question».

With the support of the Foundation José Saramago, the event took place outside the Foundation offices and was moderated by Simão Bento (Projecto Ruído), with a significant attendance of a young and interested audience.

Idália Tiago (Foundation José Saramago) recalled José Saramago's commitment to the cause of Palestine to justify the full suitability of this initiative in the Foundation's space.

The initial speeches were made by MPPM (Raul Ramires) and MDM (Women's Democratic Movement).

This was followed by speeches by representatives of other organizations that are members of the Platform, namely, AEFCSH (Students' Association of the Faculty of Social Sciences and Humanities), JCP (Communist Youth), Pioneiros de Portugal (Portugal Young Pioneers), Interjovem (Youth Section of the General Confederation of Portuguese Workers) and CPPC (Portuguese Council for Peace and Cooperation).

At the end, a motion was unanimously approved that calls for:

- The end of the expulsion of Palestinians from their homes and territories,
- The end of Israel's terrorist policy, which violates several United Nations resolutions and International Law;
- That the Portuguese government condemn Israel for its crimes;
- The lifting of the criminal siege of Gaza;
- The fulfilment of the national rights of the Palestinian people, and the establishment of a free, independent and sovereign State of Palestine, within the borders of June 1967 and with East Jerusalem as its capital, as well as the fulfilment of the right of return of the refugees. 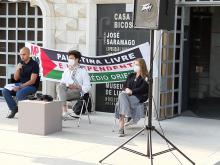 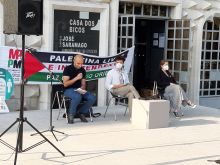 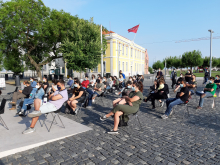 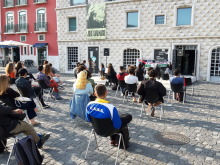 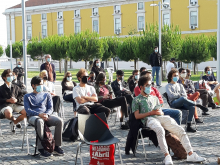