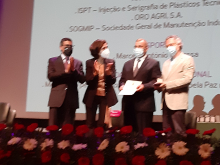 The MPPM was awarded with the Municipal Medal of Merit of Palmela - Silver Degree - International Solidarity in a ceremony carried out today, June 1st, the Day of the Municipality, in the Municipal Theatre of São João.

The Mayor, Álvaro Balseiro Amaro, and the President of the Municipal Assembly, Ana Teresa Vicente, delivered the Medal and the respective Diploma. It was received, in representation of the MPPM, by Carlos Almeida, Vice-President, in the presence of the Ambassador of Palestine, Nabil Abuznaid.

According to the Regulation of the Palmela Municipality decorations, "the Municipal Medal of Merit is destined to distinguish people, singular or collective, national or foreign, by its significant contribution in the environmental, social, cultural, economic and sportive field or by other contributions of notable importance that justify such recognition". 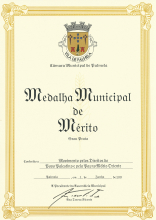