Meeting for Peace in Setúbal 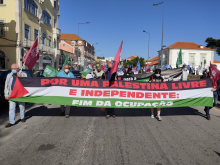 Setúbal hosted the 2nd Meeting for Peace promoted by the CPPC – Portuguese Council for Peace and Cooperation together with 11 other organizations, including MPPM – Portuguese Movement for the Rights of Palestinian People and for Peace in the Middle East.

With the support of the Municipality of Setúbal, the second edition of the Meeting for Peace was held on Saturday 5 June at the Luísa Todi Municipal Forum, continuing an initiative that began in Loures on October 20, 2018.

The twelve promoting entities (CPPC — Portuguese Council for Peace and Cooperation, Municipality of Setúbal, Municipality of Loures, CGTP-IN — General Confederation of the Portuguese Workers, CPCCRD — Portuguese Confederation of Culture, Recreation and Sport Collectivities, FENPROF  —National Federation of Theachers' Unions, JOC —Young Catholic Workers, OCPM —Portuguese Catholic Work for Migrations, MDM — Women's Democratic Movement, Movement of Municipalities for Peace, MPPM and URAP — Union of Portuguese Antifascist Resistants) were joined by dozens of others who gave their support and were represented at the initiative.

In the opening session, with the promoting organizations represented on stage, there were speeches by Maria das Dores Meira, Mayor of Setúbal, and Ilda Figueiredo, chairperson of CPPC.

The first session discussed the topic «Peace and Disarmament». The session was chaired by Baptista Alves (CPPC). The panel included Regina Marques (MDM), Joaquim Santos (Mayor of Seixal, representing the Movemente of Municipalities for Peace) and Anabela Carlos (URAP).

The second session dealt with «Culture and Education for Peace». The panel was composed of Isabel Graça (CPCCRD), who chaired, Bernardino Soares (Mayor of Loures), José Costa (FENPROF) and Gabriel Esteves (JOC).

«Solidarity and Cooperation» was the theme of the third session, the panel of which, chaired by Eugénia Quaresma (OCPM), also included Isabel Camarinha (CGTP-IN), Jorge Cadima (MPPM) and Ricardo Oliveira (Municipality of Setúbal).

In addition to the interventions of the members of the different panels, there were about three dozen other interventions, all followed with great interest by the audience that fully filled the capacity allowed by the health authorities.

The situation in Palestine, in addition to being dealt with by the two MPPM representatives, was also addressed by several other speakers.

The meeting approved an «Appeal for the Defence of Peace» and ended with a cultural moment of music and dance that evoked Israel's recent aggression against Gaza.

This was followed by a Parade for Peace, along the streets of Setúbal, which began at the Luísa Todi Municipal Forum and ended at the Monument to Anti-Fascist Resistance, Freedom and Democracy, with the reading of the «Appeal for the Defence of Peace». 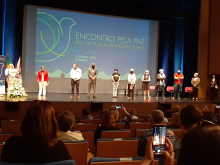 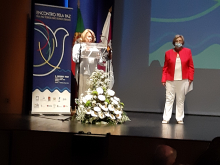 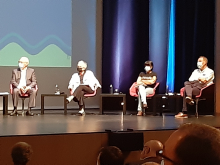 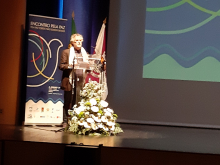 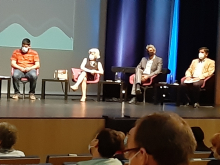 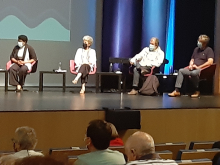 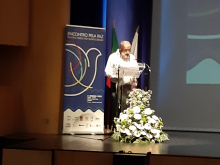 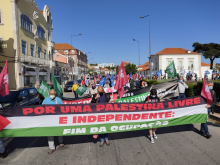 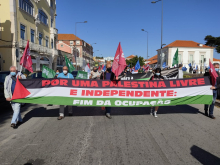 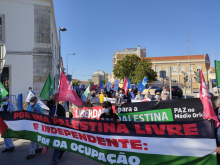 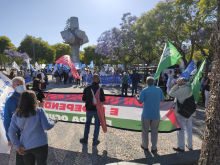